The History of OEC

Turning on the lights: The Rural Electrification Act 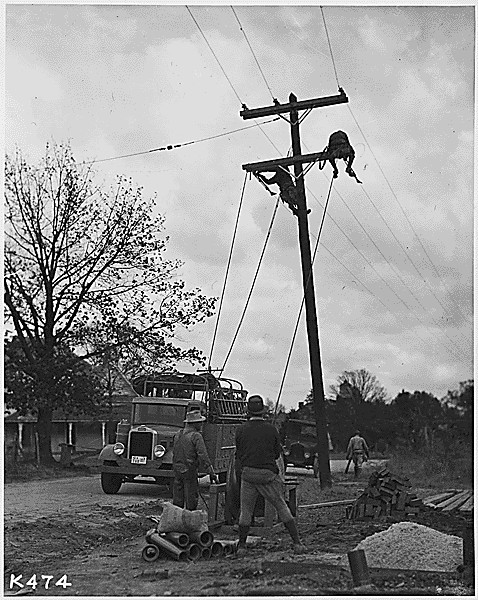 Since 1936, electric cooperatives, including Oklahoma Electric, played a vital role in changing the way rural farmers operated and forever changed rural American homes. In the 1930s, while 90% of the urban population had electricity, only one in 10 rural homes had electric service. Farmers did not have access to modern machinery and chores were often done by the dim light of kerosene lamps all because the investor-owned utility companies that supplied power in the cities argued it was too expensive to string electricity lines to these isolated areas. Life was hard for those in remote areas and many lived in poverty.

With little more than a dream and a pioneer spirit to see the lights turned on, a group of farmers in Cleveland and McClain counties banded together to form an ad hoc committee to pursue the formation of an electric cooperative in central Oklahoma. They held meetings and went door-to-door seeking interest and commitments from their neighbors. Their courage, determination and hard work paid off: On Jan. 13, 1937, upon meeting the requirements to acquire a loan from the Rural Electrification Administration, Oklahoma Inter-County Electric Cooperative became recognized as a full-fledged rural electric cooperative.

During the first year and a half, the elected Board of Trustees dedicated their time to purchasing equipment, hiring employees and handling legal matters. The fruits of their labor was realized when line construction began in May 1938.

The co-op’s first linemen worked out of pick-up trucks and did everything by hand using a few crude tools. The men worked from dawn to dusk, six days a week, and spent many nights sleeping in pastures, but they believed the co-op was the finest thing that ever happened and they persevered. The first cooperative power line in the area stretched south of Noble—from Bailey’s Corner at Highway 77—to Slaughterville. By the end of 1938, over 260 miles of line was energized, bringing electricity to 428 members. The night the lights came on, OEC’s board president, E.E. “Doc” Hardin, hosted a “Turning On” party to mark the beginning of a new era for farming families. The crowd that gathered to watch Doc ceremoniously throw on the switch to a single electric light bulb probably did not foresee the tremendous impact the electric cooperative movement would have on rural America. Cooperatives brought an urban standard of living to those in the country and changed the face of the national economy by promoting progress in the rural sector.

The following decades brought about tremendous growth and expansion due to dependence on power and electrical living. Oklahoma Electric Cooperative (the name was shortened in 1939) kept extending its lines and individual consumers were constantly finding new ways to use more electricity. In the 40s, representatives from OEC and eight other co-ops in the state, embarked on a project to ensure adequate and affordable power. In 1953, construction of a power generation cooperative, Western Electric Cooperative (now Western Farmers Electric Cooperative), began. During the Sixties, OEC was promoting the use of electricity by offering an appliance showroom
and education on how to properly and safely use appliances in the home, appliance rebates, free electric hot water tanks and cheap power – 1 cent per kilowatt hour. The Oil Embargo and ensuing Energy Crisis during the ’70s resulted in an era of conservation, territorial boundary conflicts with local investor-owned power companies and power extension/annexation legal battles. Energy savings measures continued in the 1980s, particularly after WFEC’s 450-megawatt coal-fired generating plant was brought online in 1982. Electric rates increased nearly 40% from one month to the next.

Technological improvements to both the billing and meter reading programs were realized in the ’80s. These improvements, which streamlined processes and improved customer service, continued into the ’90s and put OEC at the forefront of innovation in the electric industry.

Everything You Need
FROM MYOEC