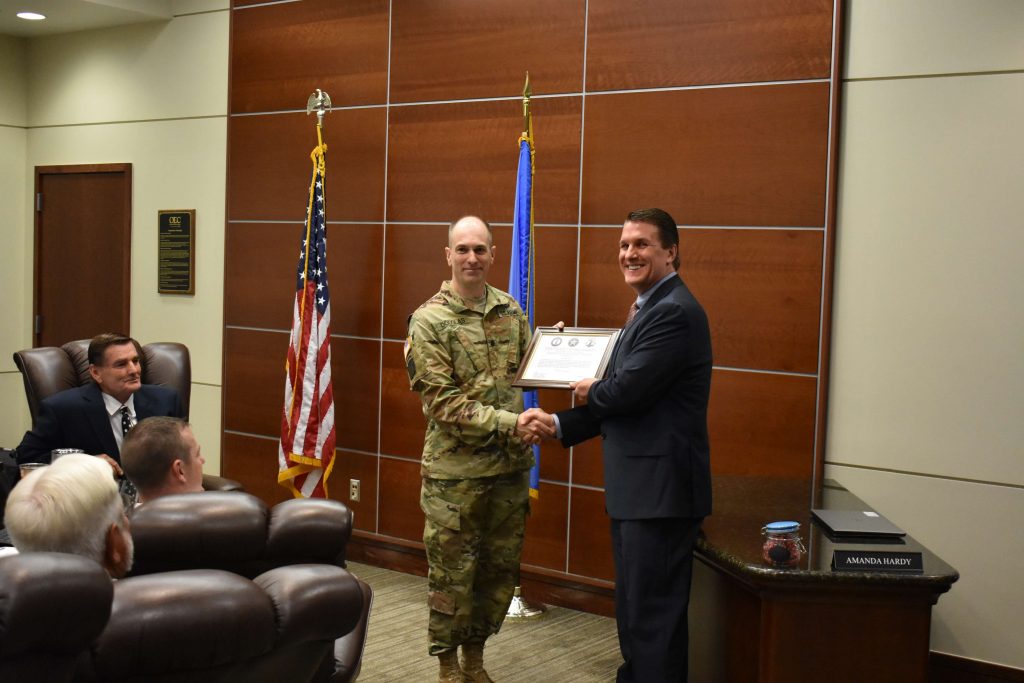 Oklahoma Army National Guard (OKARNG) soldiers are no stranger to working side-by-side with fellow government agencies at home and on the battlefield. However, during a two-week training event at Camp Atterbury, Indiana, soldiers from the OKARNG trained with a civilian agency — OEC — to better prepare for a threat on the cyber battlefield.

For the scenario that took place May 14-18, a fictitious transportation company known as Jet Black was attempting to roll out a nationwide turnpike system that was receiving a barrage of cyber attacks from threat actors. Soldiers from the joint, 10-member Defense Cyber Operations Element (DCOE) cyber response team, comprised of soldiers from the OKARNG and Arkansas Army National Guard, provided technical assistance to protect the fictional infrastructure asset.

The OKARNG invited Brad Keener, OEC information technology system engineer, to play the role of the IT department for the fabricated agency.

“As an IT professional, coming in and working with other IT professionals on a mock-chaos situation, it really is a unique opportunity to come in and test their skills,” Keener said. “Those soldiers were sharp. It was an absolute pleasure working with them.”

Lt. Col. Chris Douglas, OKARNG DCOE team chief, said working with OEC was his first time partnering with a civilian agency. He welcomes the opportunity to work with and learn from others in the future.

“When I was looking to get our team together to go to Cyber Shield, I was looking for a mission partner that was a non-government agency, civilian organization in our community,” Douglas said. “Since we as the Guard are involved in the local communities, I looked at electricity as one of those infrastructures. I thought OEC would be a natural partner with us because they are out in rural communities here in Oklahoma. Brad was able to step into that role and just run with it.”

The DCOE is strictly focused on cyber defense operations rather than offensive operations. Douglas said the role of the DCOE is to defend the terrain, fix whatever bad guys broke, assist the agencies with building a remediation plan and help defend the critical cyber infrastructure.

“It is a unique training opportunity for us because we are entering into their network to help defend it for them and we have no idea what it looks like,” said Douglas. “How can we step in and how can we defend that? What would we need to know and what would we need to provide? That was the fun part for us – to challenge our technical skills and figure out where and how the threat actors were getting in.

“Looking at real world scenarios, there are real threat actors out there,” Douglas added. “We look at those scenarios that are happening out there in the real world and we try to train for them; train like we fight.”

Keener said there is more to cyber security than the constant paranoia of a system being hacked. Rather than worry, he said he sees it as an opportunity for preparation.

“We are always investigating ways to harden our system to prevent these types of attacks,” Keener continued. “One thing I have considered is what it would take to bring somebody in and bring them up to speed on what we currently have. Moving forward, we are going to better prepare ourselves.”

“The IT industry is such a broad field that it is impossible to be an expert in everything,” Keener noted. “In an emergency situation, it is necessary to bring in somebody you do not necessarily know. Therefore, it is vital to have relationships already established before something goes wrong.”

“From our standpoint, if we had an event like this happen, for OEC, it was great to see the steps involved from the National Guard perspective on what they would need from us,” Keener said. “I think it’s a great benefit to establish this relationship with the National Guard before something happens. The more the Guard can do that, I think the better they serve, not only the community, but the nation.”

Everything You Need
FROM MY OEC