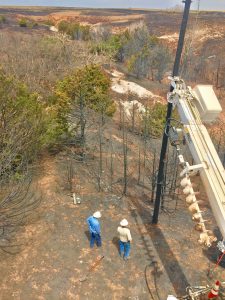 When an electric co-op is in need, an army of other co-ops stand ready to provide any support needed. OEC has been on both the giving and receiving end and in April sent a six-man crew to help restore power after ravenous wildfires destroyed thousands of acres in northwest Oklahoma.

At its peak, Northwestern Electric Cooperative (NWEC), headquartered in Woodward, experienced loss of power to 1,800 meters — 15 percent of its entire system. Over 800 poles were lost due to the fires.

After seven days, exhausted crews restored all power and were able to return home.

NWEC has experienced an unfortunate number of natural disasters over the past 13 months. OEC sent crews in April 2017 to help restore power following a late-season ice storm and blizzard, then again a few months later following a damaging tornado. Here’s to hoping NWEC — and all co-ops — are in for a very uneventful spring and summer.